The build chain was originally made by Harry Li. I just continued the project and added support for static library linking, debugging etc. The 1.0 version can also build static libs, which can easily be linked from Symbian .mmp files,or Qt’s .pro files. Now we should be able to use the old already ported symbian engines(gpsp etc) with Qt too, so the porting process from the old Avkon based UI system to the Qt’s UI should be more pleasant 🙂

Here are the instructions to use this environment.

Build with this “Gnu Make for Symbian”, you need three files Makefile, defines.mk and config.mk in myapp/gms path. You should also make folders myapp/gms/dist/gcce and myapp/gms/obj/gcce.Then you need to install MSYS . Also three environment parameters should be set like this:

Please be noted the first one should contains a trailing slash like classic EPOCROOT environment variable. The second one is the ActivePerl .exe file used by some resource compiler script. The last one is the path to GCCE compiler installation path, without trailing slash. If there are spaces in any of them, please use “\ ” backslash with a space instead.
After all these done, you could change your working directory into the build home by “cd /c/myapp/gms“. Then use the following commands to build.

a sample of config.mk is shown on below. The syntax is pretty similar to the mmp file. Note that if you are creating a static library, then you don’t have to define uid’s and libraries to be linked etc (as in mmp-files).

note that the capabilities are added with a “+” sign in between capabilties. The cert, key and pass variables are for app signing.

We are not going to build the project so we have to undo the building. Go to Window > Preferences > Run/Debug > Launching and then untick “Build (if required) before launching”. 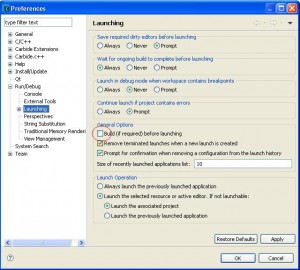 untick “Build (if required) before launching”.

Then just right click the project and select Debug as -> Debug Configurations and configure the TRK and debugging stuff as you usually do. Then go into the Executables tab and select “Executables selected below” in “Load symbols for these executables and target them for debugging”. Now click add and find you executable under epoc32\release\gcce\udeb folder and start debugging with TRK.

Modifying the build environment is quite easy, if you have any previous experience of editing Makefiles. You should take a look at Symbian OS post-linker “elf2e32” documentation if you like to change any symbian OS specific values. For example EPOCALLOWDLL data will be  “–dlldata” value to the post linker etc. The GCCE documentation can be found from the Codesourcery’s site. Here is link to the 2009q1 release documentation.
</br>

If you also want to use newer version of GCCE you should see forum.nokia wiki page about the update process( changes in header files etc). You should make following modification to the MinGW build chain for newer GCCE.

The build chain was originally made by Harry Li. I just continued the project and added support for static library linking, debugging etc. MOTIVATION The generic makefile gives you a better co...

Fast image scaling with multiplier between 1-2

Porting The AntSnes to the S60 5th edition