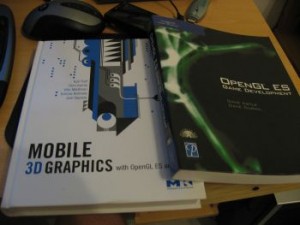 I have purchased two books about OpenGL ES. The one on the right “OpenGL ES game development” I bought several years ago. Its primary focused for an average developer, who wants to learn OpenGL ES and has OpenGL background. The book has chapter about fixed point math and other limitations to deal with mobile devices. So it’s really not ideal for a mobile developer, who want’s to learn OpenGL ES. It’s a good book about limitations of mobile platform, but not really good book for learning to develop for OpenGL ES.

The book on the left”Mobile 3D Graphics with OpenGL ES and M3G” I got recently. It is primary targeting mobile developers, who want to create 3d-grapcics. So this was the right book for me. The first chapters handle 3d graphics and math in general levels and the later chapters tell you about OpenGL ES and M3G. The book also had chapter about EGL, which is used to create OpenGL surfaces in Symbian OS, so it really has everything that I need for developing OpenGL ES for Symbian/S60.

I’m only going to create a simple OpenGL ES renderer for Snes9x, but it’s still nice to learn 3d graphics in general. I might create some simple 3d demo after I finish Snes9x porting.

In my previous post I wrote about blit with opengl es 2.0 texture upload. However I noticed that using just Qt’s QGLWidget and implementing only the paintEvent is as fast as the texture upload with...

OpenGL ES 2.0 is fully shader based, which means you can’t draw any geometry without having the appropriate shaders loaded and bound. This means there is more setup code required to render than the...

The OpenGL ES frameworks expect to have image size to be powers of two. Therefore we create 256×256 frame and then create our image into it as a sub frame. Here is an example of opengl es init func...