After feb11 when Nokia killed both Symbian and Meego I have been thinking what should be my next platform. I have been casual Android user, and I have to admit that I don’t like it much, plus it already has all of my favorite emulators ported into it, so I couldn’t figure out anything that I would want to develop for it( it kind of already has everything already).

Today I got the Lumia 800 from nokia launchpad, and I have to admit that I really like the device a lot. All the basic apps are scrolling at 60fps, and I can acess facebook and twitter really well. However it does not yet have any cool app, sucs as emulator on it (yet), so it’s an interesting platform.

In spec vise the Lumia seems also pretty nice device. It has Qualcom’s MSM8255 -SOC, which contains 1,4 Ghz AMR Cortex A-8 processor and Adreno 205 GPU, which is plenty for games and emulators. 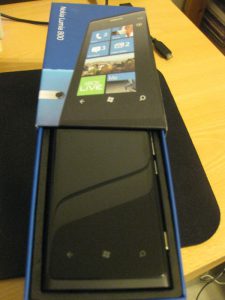 The problem is that currently the wp7 doesn’t support native code for 3rd parties, so you’re stuck with the C#. Luckily there’s also some progress even on that area, as we can see on the XDA-developers forum: http://forum.xda-developers.com/showthread.php?t=1299134 You’re also going to have to jailbreak you phone with some jaibreak. The most recent jailbreak project is WindowBreak http://windowsphonehacker.com/articles/the_windowbreak_project-12-23-11

I’ll also start hacking with the wp7, and see what I can do with it 🙂

I have played with Visual Studio 2008 and Microsoft Mobile SDK to build some native code for windows phone. This is pretty much a LOG for myself, since I tend to forget things. Currently I have the...

How did my native code experiment go with wp7

I have been pretty much spending all my free time during the winter for snowboarding and ice climbing. Now that the winter is nearly over at northern Europe, I got some time to come back to my hack...

The Myth of GPL Being Banned in Microsoft Marketplace

There has been a lot of talk about GPL being incompatible with Microsoft market place (as with Apple’s appstore). For example this Arstechnica post from 2011. http://arstechnica.com/information-tec...