Summeli.com
Hammering nails with a chainsaw
Home What’s up with the releases
Post
Cancel

What’s up with the releases

This blog has been pretty quiet lately, and maybe you’re wondering why there has been no releases lateley 🙂 Well, I have been snowboarding the last month, so I really haven’t made any progress. I still have a lot of photo’s and videos to edit, which will keep me away from my emulator projects for a while.. But soon the releases will be coming at the usual speed 🙂 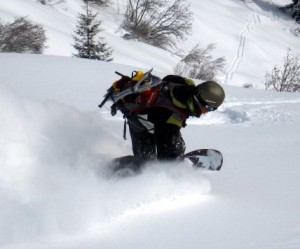 As I said earlier the future of my emulators is in the Qt. The works is proceeding really well. The AntSnesQt is only missing style sheet, and then I could release it. Actually I already have started the gpsp port with the same Qt based UI. The gpsp requires few SDL-alike functions to be mapped into the UI, but I can mostly reuse the stuff I made for the AntSnes.

I haven’t abandoned the psx4symbian port, but I’m really not working on it neither. The proof of concept was made in couple of hours after the gpsp port, and my plan is to reuse all the gpsp stuff again to make that one. This should be quite fast to thing to do after I have the gpsp running on Qt.

The Symbian^3 phones will be a lot better for gaming/emulation because of the new graphics architecture (NGA) . The basic idea in the NGA is that now you can draw into the screen more directly and with graphic accelerations (opengl es 2.0, openvg, etc.) . See the graphics architecture evolution in Symbian wiki page: http://developer.symbian.org/wiki/index.php/Graphics/Component_Architecture_Evolution. I expect that with the new graphics architecture The AntSnes and the gpsp emulator should be able to run at full speed (60 fps). This would also give a huge performance boost for the psx4all 🙂
Here’s a summary how I’m planning to proceed with my emulators projects. 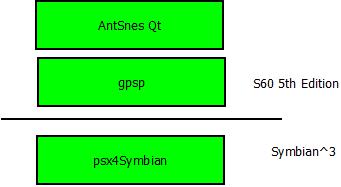 AtnSnes is Snes9x emulator for Symbian. It is actually based on DrPocketSNES version 6.4.4, which in turn is based on snes9x 1.39 The new AntSnes comes with multitouch and with new transparent keys...

the gpSP is a gameboy advance emulator originally written by Exophase. And now it’s ported to the Symbian OS! It seems that Nokia has changed something with Symbian memory management in new Symbian...

I’ll be using Qt with gpsp and psx4all ports

Currently I have the dynamic recompilation running without the trampoline pattern (thanks to hinkka’s tips), so there’s no deoptimizations in the dynarec side anymore. However the speed is not near...