Thanks for the localization goes to following persons:

Did you want to make translation for your own native language, but missed AntSnes release 0.6? Don’t worry, you’ll get a new chance later when I’m making a port for the S60 5th edition.

Just download and install.
If you got an error “unable to install”, or “certificate error” you might be having problems with the certificate. See my other blog post about two common fixes for this. Fixing self-signed certificate related problems

Video Renderers: A restart is required after video renderer has been changed

Screen Orientatuions: A restart is required after orientation has been changed

The Video settings modification takes effect, when AntSnes is started next time( a restart required). 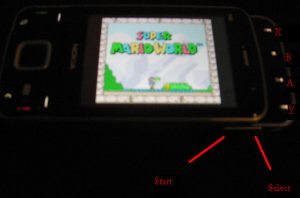 The Audio isn’t probably working. If you get it working, please post you config, phone and the game 🙂
Enable Audio: On/Off
Sample Rate: 8000Hz, 11025Hz, 16000Hz, 22050Hz and 44100Hz can be chosen
Stereo: On/Off
Volume: Adjust volume
Enable SpeedHack: On/Off. The SpeedHack makes audio render a bit faster, but it might cause some errors with some roms.

Start key config to configure keys. The multimediakeys are not supported in the key config, but you can use any normal keys in here.

My Snes9x port to S60 is somewhat working and the alpha-version is ready for download. I have been testing AntSnes with N95 and N96, but I assume that it will run on other 3.1 and 3.2 S60 phones as...

The new version is optimized for speed, which gives a huge performance boost for N96 (it’s nice for N95 too). I expect this binary to work with S60 3.1 and 3.2 phones, but I’m planning to add suppo...